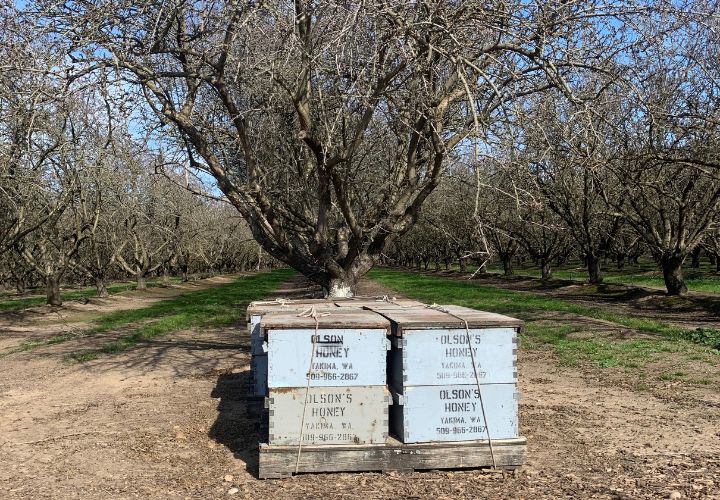 Olson Honey operates across Washington State in 2-3 teams, fulfilling various pollination contracts throughout the season. When it’s time to store the hives for winter, it’s been a challenge to confirm that every hive has received “Finals” - the operation’s term for the set of preparations each hive requires before wintering indoors. This includes making sure the hives have enough honey and pollen stores, and are queenright and strong.

Olson Honey uses BeeTrack to confirm that every hive received Finals. Nectar created a customized, color-coded map that displays which yards had Finals applied. Owner Matthew Shakespear and foreman Matthew Imbrock were able to determine which yards received attention and which ones were still waiting by referencing the map.

Preparation for winter storage went smoother than previous years because of the Finals map. Since their hives are spread over a great distance, it was possible to miss one. They used the map to make sure that every hive was attended and worked so the icons were all green - this means that every hive had been visited and was accounted for.

Olson Honey has been operating from Yakima, WA since 1977. They are primarily pollinators and run around 12,000 hives, however they also do some honey production. The operation is owned by Matthew Shakespear. Matthew Imbrock is the foreman and leads BeeTrack integration.

A standard season can involve more than ten moves of the hives, as they travel from California almonds, and around Washington State. Once almond pollination has wrapped up in California, they head back north and pollinate tree fruit, blueberries in the western Washington and cranberries around the Long Beach area. They also produce some honey in the eastern part of the state. The majority of their pollination occurs in central Washington, before moving the hives to indoor wintering facilities.

In order to keep up with the demanding pollination schedule, Olson Honey employs anywhere from 15-20 beekeepers at a time. They work in 2-3 teams, and many of their workers are not English-speaking, which adds an additional challenge in communication. Since there are so many moving parts to their business, Olson Honey needs to stay on top of asset tracking and logistics to make the most of their season.

BeeTrack helps Olson Honey know where their hives are located, the date and time a job got done, what was done last year and what has to be done next year. They had been working off of meticulous notes left by the previous owner, however Imbrock describes BeeTrack as a “huge step ahead for us, especially when it comes to the logistics of having hives spread out over a large area”. Additionally, the app is available in Spanish, which facilitates communication between team members.

At the conclusion of the 2022 season, Olson Honey used a modified version of BeeTrack’s Last Inspection map, accompanied by a yard list, to ensure the round of final hive visits were done efficiently. The map shows all the yards that have had their Finals, as well as the ones still requiring attention.

Interested in visualizing data from your own operation? BeeTrack has the ability to report on almost any beekeeping practice using color-coded maps. Contact us to learn more.

Imbrock deemed the map a success because the operation received information to determine what task they should focus on.

The Finals map improved winter preparations over the last year because their hives are spread over a great distance and it can be easy to miss one. They used the map to make sure that every hive was attended, and worked to make sure that the map was all green. If there were any unchecked hives on the map then they drove out to see what was going on or if a hive was left behind.

Imbrock says that BeeTrack has been a major benefit to the operation this season, because he had all the logistical information at his fingertips as opposed to digging through notes and spreadsheets. “BeeTrack helps me answer questions like ‘What happened today?’, ‘What orchards were set today?’, ‘How many hives were committed?’, and ‘What hives are ready to ship?’,” he says.

Once the bees come out of winter storage, Imbrock sees BeeTrack becoming essential during the busiest part of their pollination season. It can be a challenge to juggle the logistics of their contracts. Since they’re traveling to California and around Washington State, hive movements need to be planned exactly.  “If temperatures follow a ‘normal’ pattern, then managing logistics is doable. However the minute there’s a frost in one area, or another area heats up ahead of schedule, things can become crazy,”. Imbrock explains.

Olson Honey is also looking forward to their future use of BeeTrack. The app is expanding its pollination logistics capabilities to give users the ability to enter orchard blocks and hive drops while in the field. Imbrock adds, “We’re really excited about the possibility to track hives in pollination and know exactly where they are in the orchard, and which ones have been checked”.

You may enjoy these related stories

Managing Multiple Teams From A Distance With BeeTrack

Noyes Apiaries operates with multiple teams in different states. Managers wanted to know who visited which yards and what jobs they completed. Nectar and the Noyes team developed a custom map showing when a yard had been worked last.

Busy Bee Farm has been using Excel to manage their beekeeping records for years, but it’s a challenge to stay on top of data entry during busy periods. They want to use their data to track the health and history of hives from pollination, post-pollination and winter. Busy Bee also wants to make informed decisions about which queen breeds work best for their operation. BeeTrack makes it easier for Busy Bee Farm to manage their employees and hives. Advantages include time saved through record keeping and easier planning for management.

Thank you! You are now subscribed to our mailing list
Oops! Something went wrong while submitting the form.